View basket “The Todmorden Tales” has been added to your basket.

A NEW PUBLISHING VENTURE FROM ELFIN DIARIES
The Todmorden Tales is a collection of comic stories about the (mis)adventures of a fledgling Wiccan coven in Todmorden, Yorkshire. An e-book is planned in 2021
Download a sample chapter here

The Todmorden Tales is a collection of comic stories about the (mis)adventures of a fledgling Wiccan coven in Todmorden, Yorkshire. An e-book is planned for 2021.
They were originally written for a small Pagan magazine called The Little Red Book that we published from 1994 – 2002 (when the series was called Tales of Old Todmorden). They started off as a space-filler, but people found them entertaining and asked for more. So we kept turning them out every three months (the LRB was a quarterly publication) until 1999.
We were very much involved in the Pagan scene of NW England then; writing comic scenes involving a beginning coven finding their way in magic came naturally to us. The characters – Persephone, Norton, Effie, Ivy, Terry, Worthington et al, appeared just as easily (were they based on actual people? Err… can we skip that question please?). For much of the time, the plots and action flowed out of us – the two of us would spend hours discussing them, writing and rewriting; reading through the Tales now, it’s impossible for us to say just who was responsible for which bits.
Then, sometime in early 1999, the inspiration dried up; we simply couldn’t come up with any more ideas. So the “Todmorden lot” – that’s what we called the characters, they were almost like old friends by then – got tucked away to wherever old stories go.
However, their faithful readers wouldn’t let them go and ever since have been asking us when we’re bringing out the collected Tales – and twenty-odd years on, we’ve finally got around to it. They’ve been rewritten and updated, but only a little – the setting is still the late 1990s, with no internet or smartphones. We hope you enjoy them!

There are no reviews yet.

Be the first to review “The Todmorden Tales” Cancel reply

This site uses Akismet to reduce spam. Learn how your comment data is processed.

If you have registered as a customer, you do not have to log in to buy anything. Registration simply saves you the bother of filing in the details at the checkout each time.

If you can’t remember your password, just click on “Forgot password?”(below the login box)  to be sent a new one. 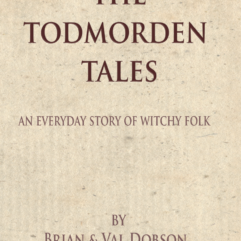 You're viewing: The Todmorden Tales £10.00
Add to basket